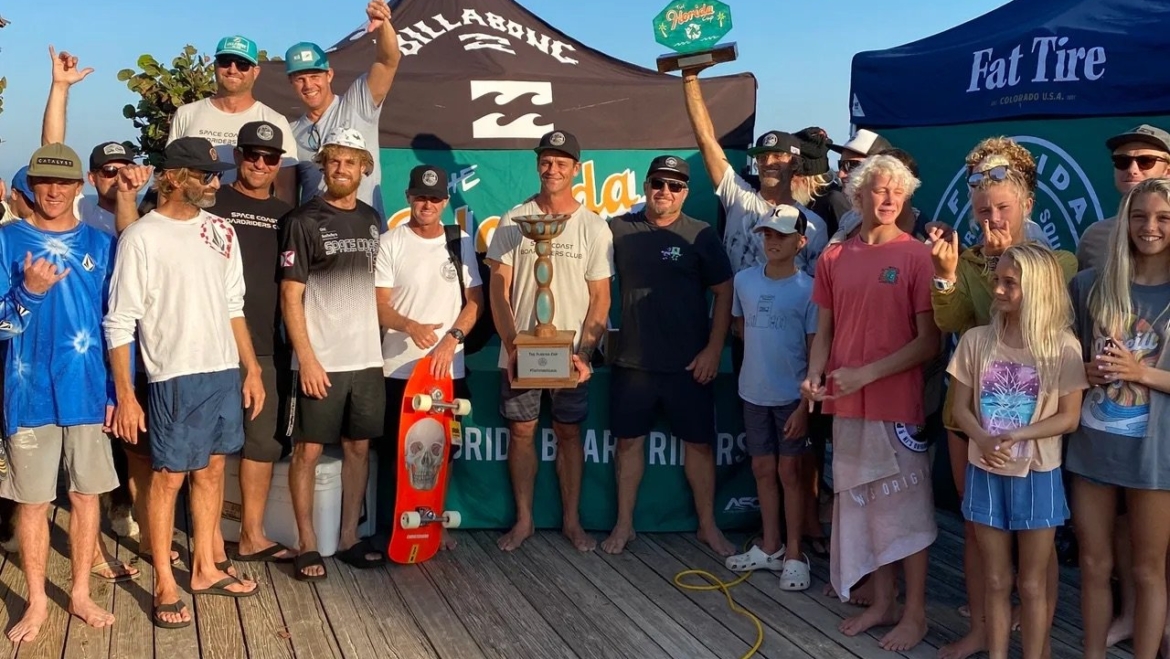 With the Florida Cup up for grabs, the Florida Boardriders Florida Cup Stop #2 of Season 2, hosted by the Space Coast BoardRiders Club and brought to you by Billabong, was finally here! The event was originally scheduled to be held at the iconic Sebastian Inlet, but because of severe coastal damage from our recent run of hurricanes, the sandbars were nearly wiped out and the event had to be moved. After careful deliberation, a decision was made by Space Coast BoardRiders Club President Mason Sapp, Event Sponsor Scott Bouchard, Florida Board Riders President Dane Jeffery’s and a group of peers to move the event to Millineum Park in Indian Harbour Beach, Florida a local sandbar that has been proving some great surf as of late.

Walking up in the morning, it was still dark. Upon arrival to the contest site, you could hear the shuffling around of event coordinator, Dane, and crew unloading the trailer, laughing and hustling gear over the boardwalk to the beach. In the background you could also hear the rumbling of decent size surf pounding the lineup. When the dawn began to break you could finally see the anticipated swell forecast stayed true to its predictions. The surf was firing at 4-6 ft + with offshore wind and epic conditions. All the teams and people started showing up. You could feel the energy and stoke levels start to rise once they laid their eyes on the surf. People hurrying to get set-up and paddle out for a warm-up sesh or a freesurf. The boardwalk then quickly became front row seats to all the morning action, as well as the judges corner and the media zone during the higher tide.

The day was ready to begin. Four teams with seven divisions converged on the beach for what would become in my opinion the best conditions yet for a Boardriders Competition. Represented were South Florida, Treasure Coast, New Smyrna Beach and of course Spacecoast. Each team stacked with a lot of very talented surfers from their region.

The day kicked off with ages 15-19 where we saw some early round action from some great young surfers and South Florida taking an early lead. As we moved to the next round, the 14 and under stole the show with their fearless approach and commitment such as Kole Mazz of Treasure Coast Boardriders hooking into a huge inside bomb, and Teddy Whittamen of Spacecoast dropping a 7.5. Not to be overlooked was the Open Women’s division who also had some very impressive and young female surfers, like Auburn Haley of New Smyrna Beach Boardriders showing their skills in some very challenging surf. Next up were the 50s, where local legend and MVP David Spier of Spacecoast Boardriders dropped an 8-point ride for his double whammy and got Spacecoast a nice little lead. Things then started to heat up as the 40s hit the water and World Champ CJ Hobgood of Spacecoast who got everyone’s attention with some world class moves. Not to mention Coach CT Taylor slamming a 6.7 on his first ride. The race got a bit tighter with New Smyrna chomping at Spacecoast’s heals. On deck was the 30s, what we all wait for. World class surfer’s like Eric Geissleman from New Smyrna beach hit the water putting on a show riding alternative equipment. Super exciting to watch and very entertaining. But at the end of the day it was the 20s that sealed the deal. Chauncey Robinson of Spacecoast Boardriders dropped a 7.93 ride for his double whammy solidifying the win for Spacecoast Boardriders.

What an amazing day! Epic waves. Great weather. Awesome crew. And last but not least the best teams represented from surrounding areas. These events are super special. Like David Spier said, “These contests are like a big reunion and bring everyone together”. People that grew up competing against each other  and have known for years are reunited. It’s a very special time for our surf community. And this was a very special win for Spacecoast Boardriders on our home turf. We all look forward to continuing these events and competitions for years to come. Thank you Florida Boardriders and US Boardriders for creating this platform!