THE RESURRECTION OF THE WCBR CLUB 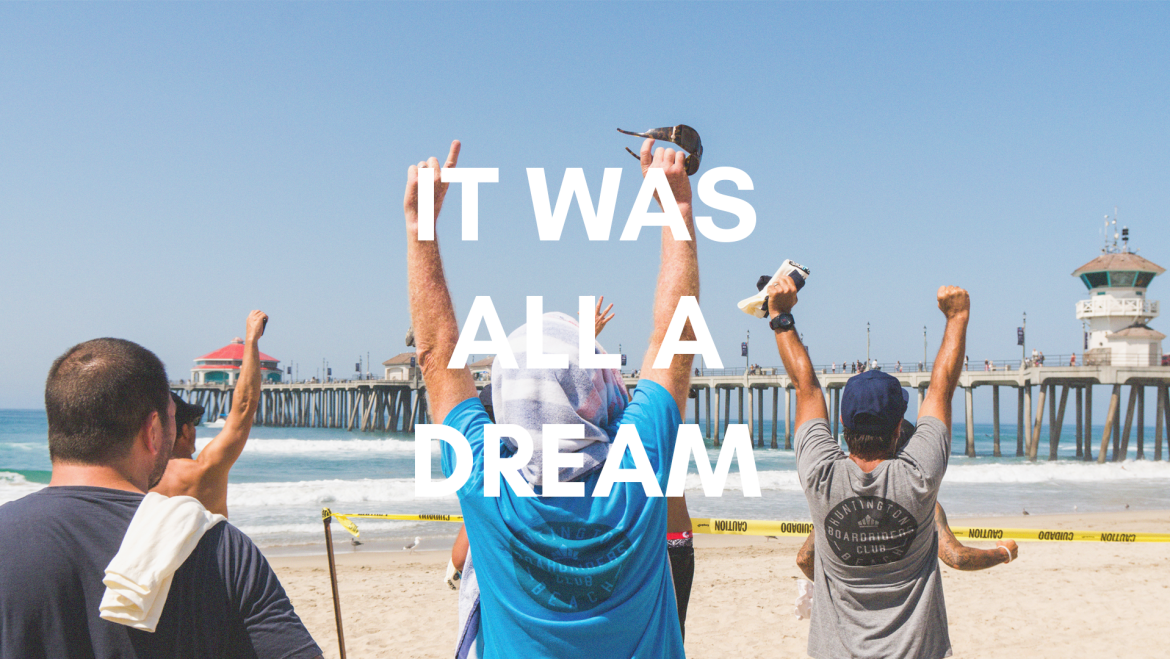 It started with a t-shirt. Three childhood friends – Casey Wheat, Ziggy Williams, and Chris Moreno – started a clothing company, Sport of Kings-Forever Young (SOKFY), from a one-car garage in Huntington Beach, then created the shirt emblazoned with the words, “West Coast Board Riders.” A sartorial calling card, of sorts, for surfers hailing from the left coast.

But that mix of cotton and silkscreened ink became the seed for a movement spanning across Southern California, soon-to-be throughout the Golden State, and potentially nationwide.

After staging a photoshoot of multigenerational Huntington Beach surfers – from Roy Crump and Chuck Linnen, who started surfing in the ‘40s, to young gun, Max Lambert – the t-shirt’s catchphrase began to come alive. Moreno wondered, “why don’t we make this a real thing?” And Wheat responded, “Why does Australia get to have all the fun?”As a staple of Aussie surf culture, there’s over 200 Aussie Board Riders clubs. The best of them duke it out annually in the Board Riders Battle: a national surf contest, which is aired by Fox Sports on Australia Day. (Yeah, it’s a big deal). The Aussie clubs are a longstanding cultural happening, with the intense local pride of soccer hooligans, blended with the bolstering hometown comradery of a community garden. World Champs like Fanning, Parko, and Steph Gilmore grew up in the uber-dominant Snapper Rocks Surfriders Club, which groomed their professional careers both in the water and out.

In America, a Coalition of Surf Clubs already exists, but it’s nothing like the hardcore, hyper-competitive, Aussie brand of surf coalitions. And in the past, a previous incarnation of Board Riders developed in California – a handful of informal clubs, in some cases considered “gangs,” existed in the ‘80s – but they fizzled into obscurity. That is, until now: the second-coming of the West Coast Board Riders Club.

Along with Billy Webb, Scott VanDerripe, Bill “BK” Keller and Pat Downey, the SOKFY guys decided to resurrect a club for Huntington Beach, with hopes that other coastal cities would follow. But surfers are like jealous toddlers during Christmas; if one kid gets a new toy, all the kids need to get it.

“We knew that if we start ours, all we have to do is tap the egos of other towns,” said Wheat. “And it all happened so quick. Within a month or so after the first meeting, Seal Beach had a club starting. Then it went from just Huntington and Seal, to six clubs all like that.”

Now, there’s the Big Six of Orange County: Huntington, Seal, Newport, Laguna, Dana Point, and San Clemente. And the anchor holding these satellite surf clubs together is a series of competitions. But being a team event, the format is unlike other surf contests. The competitors are separated by age divisions and surf against the other town’s best in a tag-team format.

“It is the most exciting surf contest around,” Ziggy said. “Other surf contests are killer, but there are dull moments leading up to the final. With this, every heat that you watch is like the final. Every guy is the best guy from their city for their age group. And everyone is heckling each other constantly. That’s the best part.”

Instead of qualification points or cash prizes, there’s a different level of stakes at play for a West Coast Board Riders contest. It’s bragging rights only. And to surfers, who are infused with an inherent hometown partiality, that’s more valuable than an oversized check. It’s like the flipside of surfing’s ugly underbelly of localism; no fists thrown, just beers bought in celebration and well-deserved heckling…until the next event.

With three contests in the books (not one, so far, with all six Orange County teams), Huntington has won two and Newport one. But now, for the first time, all six of Orange County’s finest will compete at Salt Creek on July 21st. And there’s an entire schedule of events running through the end of the year, too.

But the vision extends beyond OC. There’s stirring in Ventura, Santa Barbara, San Luis Obispo, the South Bay, and San Diego. And eventually, the east coast. What the future of the Board Riders looks like, exactly, the guys aren’t sure. But if they can pull it off, they hope it’ll become something big. Like in Australia, where surfing is on par with soccer. In the U.S., not so much.

“A lot of parents use sports to keep their kids on the straight and narrow,” Moreno said. “But surfing has never been that sport. It’s too individual. But we’re looking at it differently. If you have guys depending on you, you’re not going to get wasted the night before. You have a sense of responsibility to something bigger than your own life. You’re part of a team, a community.” – Surfline (See entire article HERE)